Casually during our regular weekday meeting, Siang and Thanos discussed the idea of having two teams from Chem-E-Car present posters at the annual Generate conference hosted by Clean Energy BC. We decided to be that second team. With less than a month away, we had to choose a topic, become experts in that topic and design a poster in hopes of winning the competition and $500 prize money. What started off as a one-time project has turned into a team interest and has some of our members looking to pursue it further.

As one of the fastest growing plants, algae uses sunlight more effectively than any other plant resulting in it having up to 2x higher energy production compared to other crops. With a composition of 50% oil by dry weight, algae is the ideal crop to use for biofuel. After significant technological advancements in growing algae, oil extraction, and biofuel conversion, the overall cost can potentially be reduced to USD $1.94 per gallon. 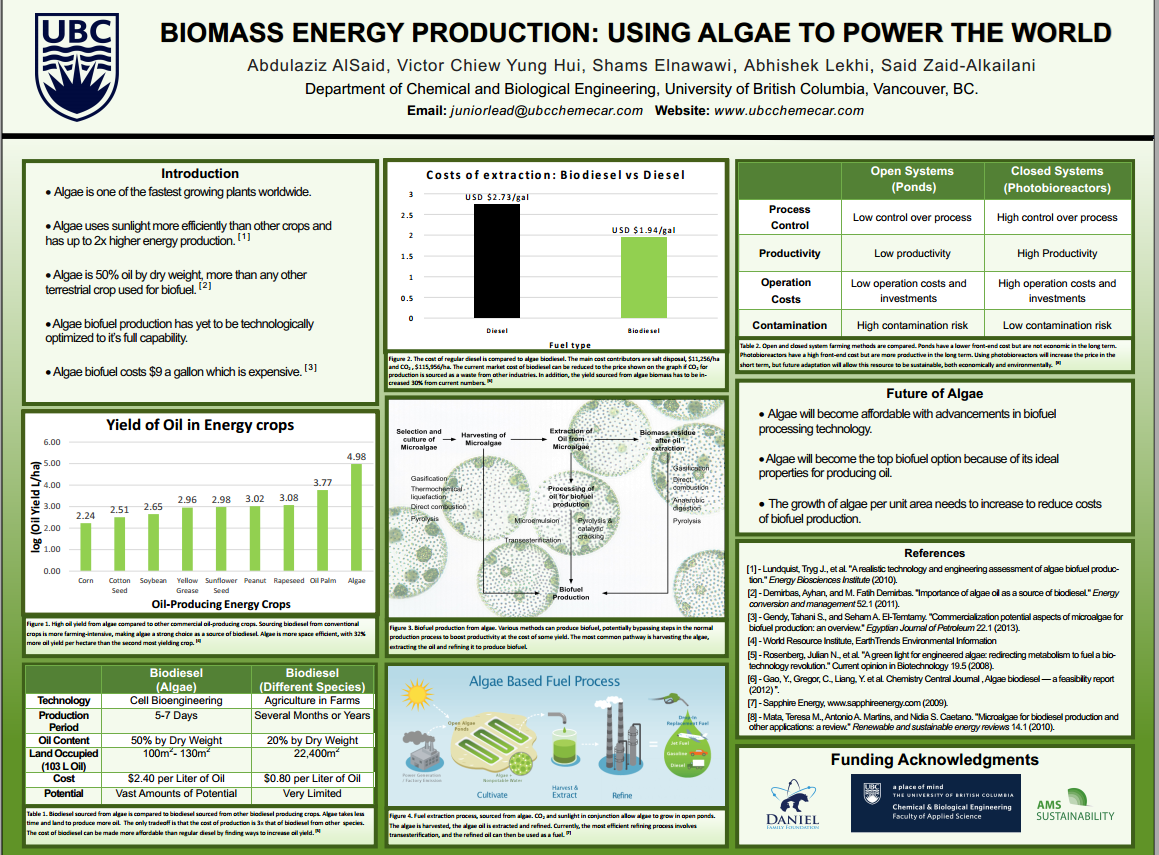 When compared to other oil producing crops, algae can produce up to 10 times more oil per hectare of land. Algae can also grow in a wide variety of environments, including saltwater, freshwater, glaciers, and even wastewater. Since algae grows in water, algae can be grown on non arable land. Algae uses sunlight and CO2 to grow, which means that CO2 emissions from power plants and factories that are normally sequestered into the ground can be redirected to grow algae, and make the biofuel a carbon sink.

There are two main methods of growing algae, open systems and closed systems. Open systems have low control over the process, low productivity, low operation costs, and high contamination risk when compared to closed systems. This contrast causes a large argument over which method is superior. At the moment, open systems are more favourable since they are much cheaper. We believe that when the technology improves, closed systems will be the future of algae farming.

With a lack of affordable technology, algae biofuels are currently a very expensive alternative to traditional fossil fuels. Despite this, from a research perspective, algae biofuels have the highest potential to replace these traditional fossil fuels. A lot of work needs to be done before algae becomes the leader of energy production for the transportation industry. The sheer magnitude of algae that can be produced from a small plot of non-arable land makes it the only viable option that can replace Big Oil and save our world from climate change.

Check out our poster for more information: Poster Link