While the chemical team is building clocks and electrical team is making a new stopping mechanism, the fuel cell team is here to ensure that the car has the power to move! This year, UBC Chem-E-Car’s Junior Battery team has expanded to incorporate a new fuel cell division. Several universities have had overwhelming success using fuel cells in their cars, and we’re hoping to cash in on this as well. We are currently designing a safe and reliable way to generate, store, and transport hydrogen gas into a PEM (Proton Exchange Membrane) fuel cell. We are working towards incorporating our fuel cell system into next year’s Chem-E-Car entry.

Why We Chose a PEM Fuel Cell

There are many different kinds of fuel cells, but all of them operate on the principle of converting the potential energy of chemicals into electrical energy. We chose to use a Proton Exchange Membrane (PEM) fuel cell, which uses hydrogen and oxygen gas as reactants. The PEM fuel cell has the most realistic operating parameters, and were a lot safer to use than the other types of fuel cells. For example, the Direct-Methanol fuel cell runs on methanol (causes blindness, comas, and death), and the solid oxide fuel cell requires an operating temperature of $700^{\circ}C$.

Hydrogen and oxygen gas are channeled through the flow fields of the fuel cell. The hydrogen enters the anode while the oxygen enters the cathode. 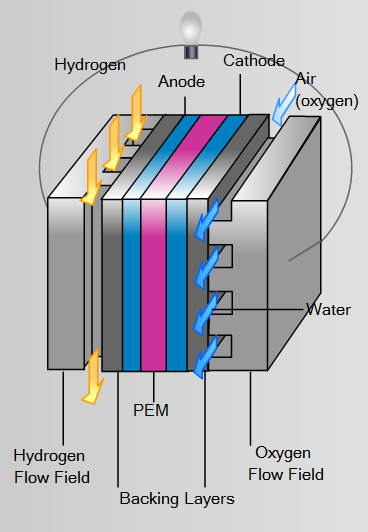 All of CHBE’s faculty were more than a bit worried when we told them we were going to work with hydrogen gas because it explodes when it reaches its lower flammability limit. This is when we decided to use a hydrogen generator to produce high purity hydrogen. The hydrogen generator works under the principle of electrolysis which is the splitting of water molecules into hydrogen and oxygen. While the electrolysis experiments we all performed in high school results in venting the gas immediately, we will be using this hydrogen gas to run a fuel cell which will power our shoe-box car. This means that we will have to be extra careful about hydrogen generation and storage. 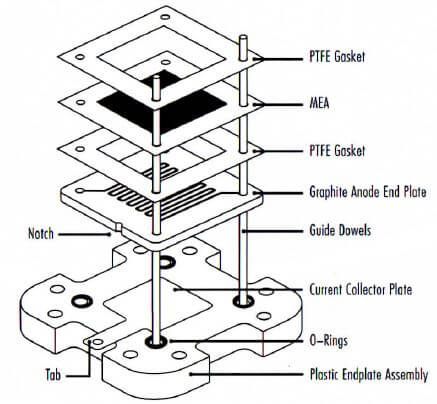 Schematic of our hydrogen fuel cell

We needed to prove that we would be working under safe conditions and came up with the following guidelines:

We must maintain a hydrogen pressure of 5 PSI as per our storage container’s specifications. We can perform partial differentiation on the Van der Waals equation to get a clean expression for the change in pressure in our storage container. This allows us to calculate how long we need to attach the pump to our generator to obtain the proper pressure and moles of hydrogen in the cylinder.

The container that we intend to use to store and pump hydrogen on the car is made out of steel because steel does not react with hydrogen.

Fuel cells are particularly praised for their ability to provide sustainable energy. The only waste product in the reaction is water, making it an environmentally-friendly zero emission panacea. Given the global energy crisis that we are in and our dependence on nonrenewable energy sources to produce fuel, fuel cell technology has been embraced by scientists and engineers as an alternative means of energy production. They are quieter and more efficient than combustion engines. All of these advantages have encouraged automobile companies like Toyota, Hyundai, and even Mercedes to manufacture their own fuel cell vehicles. The fuel cell company Ballard is providing their fuel cells to power buses in China.

Who knew that this little magic box known as the hydrogen fuel cell would change transportation for the years to come? Our mission as young and enthusiastic chemical engineering students is to prove that Hydrogen Fuel Cells are a viable solution to counteract problems such as air pollution and climate change.