Last year November, members from Chem-E-Car presented a poster on using algal biomass to produce biofuels at the annual Generate conference hosted by Clean Energy BC. Fast forward to 6 months after, Chem-E-Car has rebranded to UBC Envision and the question is, do we want to keep the algae project? With continuous interest from members and support from the community, the obvious answer is yes. However, the topic of algae biofuels is so broad and vague, what exactly do we want to do with it?

Microalgae has become an attractive source for biofuels for it has a high yield/land ratio and does not compete with agricultural crops for land. Researchers have been looking into algae biofuels production for over 50 years, however a major setback is the inability to find a cost-effective production method [1]. Our approach to tackling the problem is to maximize the products that we can obtain from the growth and extraction process. Using microalgae in treatment processes is an accepted way in decreasing nitrate and phosphate levels in wastewater. In addition, microalgae contain two compounds that are the basis of biofuels – carbohydrates and lipids. Combing everything together, we came up with the idea of a research project that explores the feasibility of a method that grows microalgae in wastewater and extracting carbohydrates and lipids for bioethanol and biodiesel production, respectively. We decided to use the strain for Chlorella vulgaris as it is commonly used in both wastewater treatment and biofuels production.

Unlike a university lab course, we were not graciously given a lab manual to follow; instead, we have to come up with our own laboratory procedures.

Algal culture begins with a pure stock or starter culture of the algal species desired and the growth media [2]. The growth medium is justified by necessary high inputs of nitrogen, phosphorus and micronutrients. NaNO3 (sodium nitrate) and NaPO4 (sodium phosphate) as the nitrogen and phosphorus sources. The medium we use is the standard algae f/2 nutrient medium, adjusted accordingly with the nitrate and phosphate concentration in the wastewater used.

The carbohydrates in microalgae (plants in general) are mostly present as structural chains in cell walls for support and rigidity. On the other hand, the lipids are generally found in the cytosol. In addition, carbohydrates are hydrophilic (dissolved in water) while lipids are hydrophobic (does not dissolve in water). The method we use to separate the dried microalgae into carbohydrate-rich and lipid-rich components is using ionic liquids. Ionic liquids work by dissolving the lipids, which separate out of the solution on addition of an antisolvent such as methanol, which are then recovered using hexane [4].

The carbohydrate chains are treated with dilute sulfuric acid for hydrolysis (breakdown of polymer to monomer); the resulting sugar monomers are fermented into bioethanol with the addition of yeast. The lipids are processed into biodiesel with addition of methanol and sodium hydroxide as a catalyst. 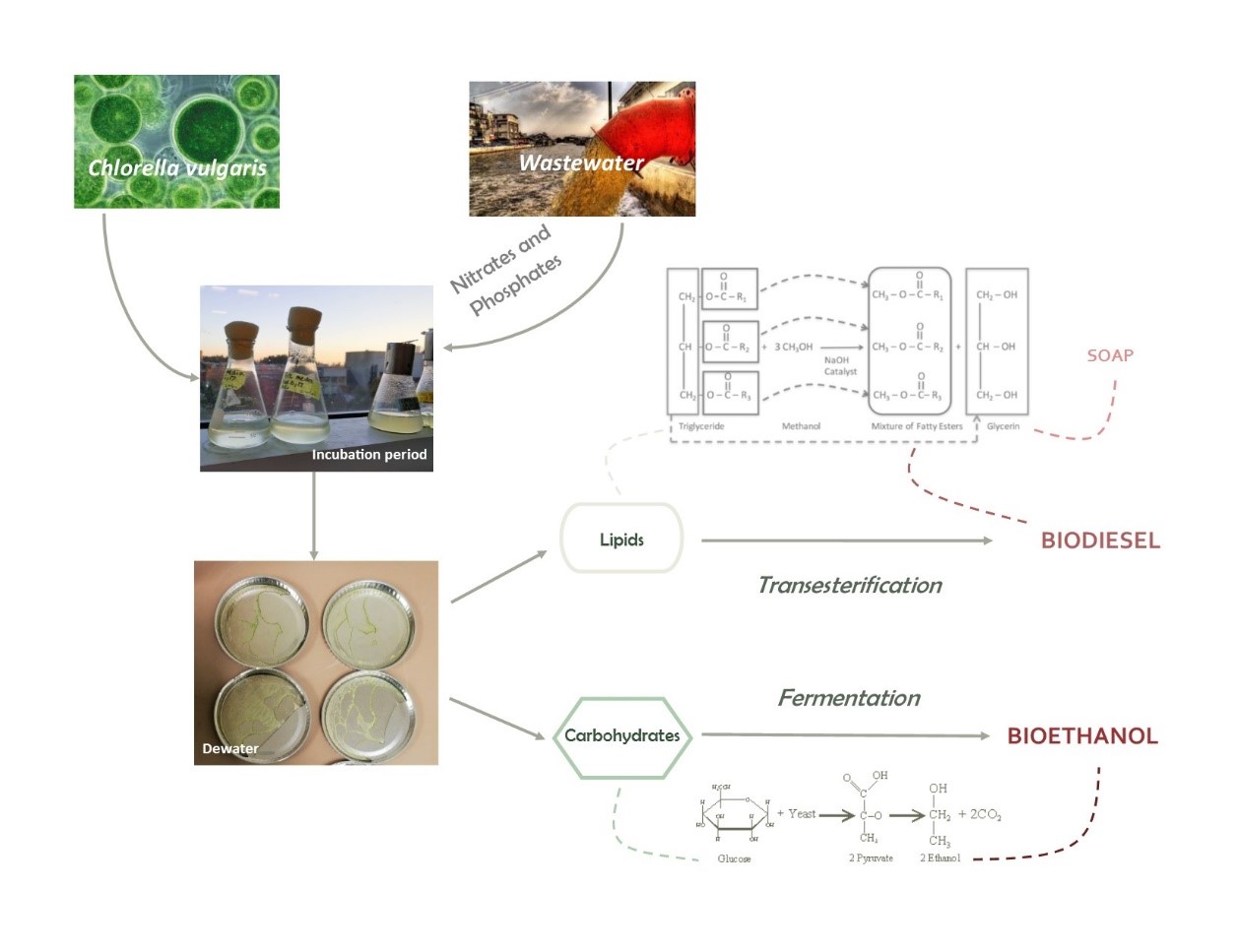 On November 27th, we returned to the Generate conference with a poster presenting our project ideas and preliminary findings. At the conference, we enjoyed talking to professionals in the field and was happy to be invited to participate in the 2018 Environmental Innovator’s Award Academic Poster Competition on March 1st, 2018.

With the school end coming to an end, we have been wrapping up our experiments. Starting in January, we will be starting our first attempts of biofuels production and adding the nitrogen starvation element into our growth periods.