Learn out about the Senior Chem-E-Car team’s winning car from the 2018 AIChE Pacific Northwest Regional Conference at Montana State University!

The AIChE 2018 Regional Conference at Montana State University brought major success to our current Chem-E-Car teams. At the conference, our teams were able to claim the following awards:

Below, we are excited to present to you Vancruiser!

By securing 1st place at Regionals, Vancruiser has advanced to compete at the AIChE 2018 National Chem-E-Car Competition this October, 2018. In the process of preparing for our next competition, the Vancruiser has been torn apart and is currently being rebuilt to optimize its functions and improve performance. The Vancruiser will be described below at its state during the Regional Competition of April, 2018. 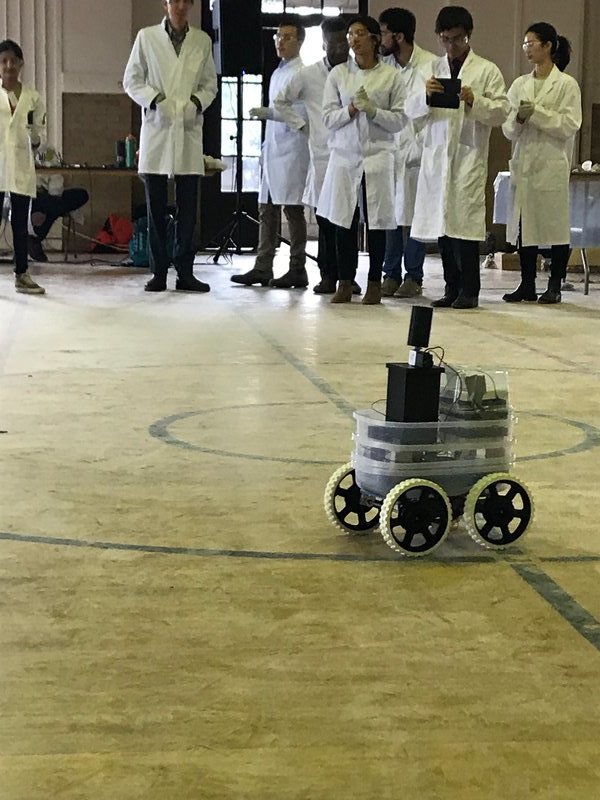 Named after our city of Vancouver, the Vancruiser uses an Iodine-Ascorbic Acid clock reaction as the stopping mechanism and a Zinc-Air battery to power the motor. The three-layered body, each of which is a tupperware container, separates the circuity, the reaction vessel and the battery, and lastly, the container holding the water load.

On the Vancruiser, Lugol’s solution was kept in the above compartment (the injection port), where its flow into the reaction vessel was controlled by a valve. The ascorbic acid, water and starch were kept within the reaction vessel, and as soon as the car began to accelerate, the Lugol’s solution was injected into the vessel. After the reaction is complete, the change in color is detected by an LED and solar panel sensor control system. Once color change in detected, the motor is stopped. 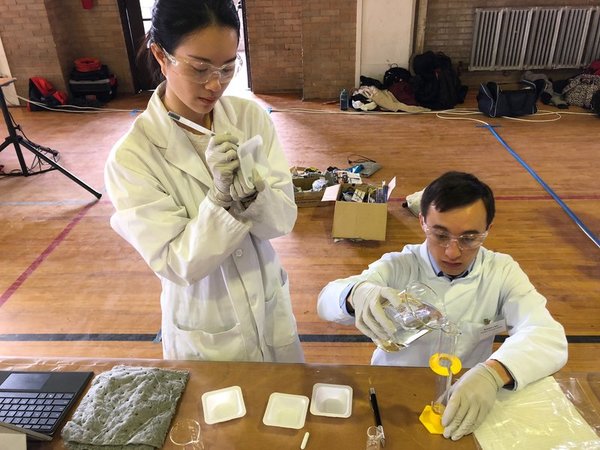 The battery used a magnesium oxide coated Gaskatel mesh as a cathode and zinc power made into a paste using water as an anode. When oxygen diffuses through and reacts with water present in the pores of the mesh creating hydroxyl ions, hydroxyl undergoes a reaction with the zinc anode which results in the release of water, zinc oxide, hydrogen and electrons which provide an approximate voltage of 1.2 V per cell. Enough cells are put together to power a 12V DC motor which moves the car at a rate of 15 meters per minute. 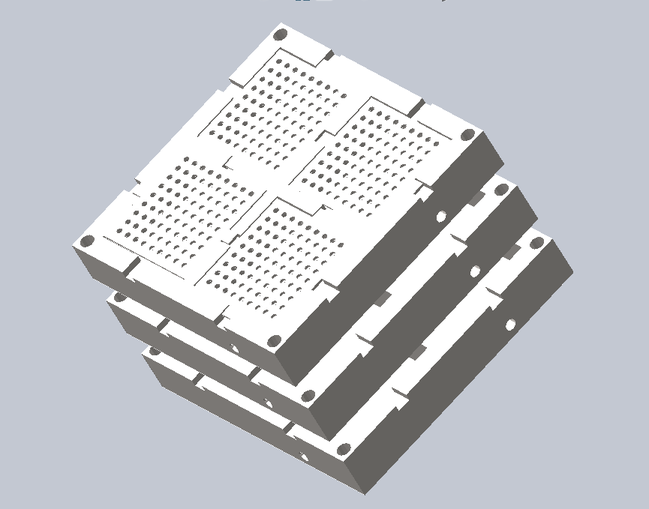 The 3D model of the battery casing is shown above. Within each of the four compartments on each stack, the lid encloses the Zinc powder, metal plating and Gaskatel, which together comprise one cell of the battery 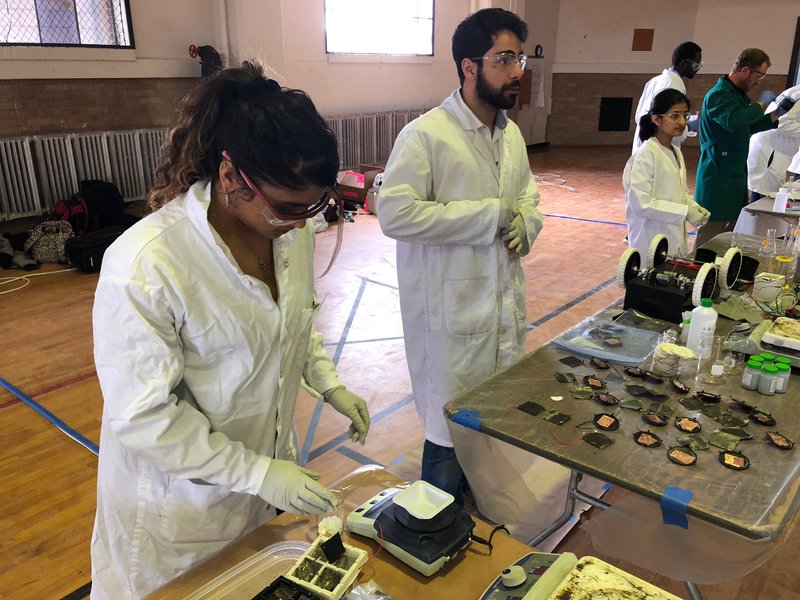 The Vancruiser uses an arduino to control the solenoid valve, detection system and stopping mechanism. An arduino is a microcontroller which can be used to control electronics in a circuit. When the car is switched on the arduino activates a solenoid valve, which allows reactant to pour into a beaker housed in a reaction vessel and initiates the iodine clock reaction. In addition, a stirring motor is activated, stirring the reactants as the reaction progresses. Simultaneously, the chemical battery is connected to the motors and the car begins to move.Once the reaction finishes the arduino detects the color change and stops the car.

Above shows the system for the solenoid valve, which controls the flow of the Lugol’s solution into the reaction vessel at the start of the run. The solenoid valve is powered by a 9V battery, which is supplied separately (not the chemical battery created by the battery team) 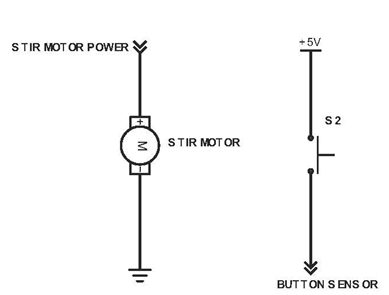 Above shows the control for the stir motor and button on the Vancruiser. The stir motor is used to spin a stir magnet within the reaction vessel to ensure the Iodine-Ascorbic Acid solution is mixed evenly

Above shows the systems for the light source, solar cell and Arduino. The light source and solar cell comprise the clock reaction sensor system and detects when the reaction has changed color. This data is sent to the Arduino, which is the so-called “brain” of the Vancruiser, and the Arduino, after receiving this data, shuts off the motor powering the movement of the car

Above shows the system for the Zinc-air battery (created by the power source team), motor and Arduino. Once the Arduino has been informed of the color change, it triggers the stopping mechanism, which prevents the battery from powering the motor, and hence stopping the car

All the battery casings, reaction vessel and circuity cover are 3D printed. Water was secured in 700mL foldable water packs. Stacked Tupperware containers made up the body of the car. The motor powering the car was a 12 V DC motor. 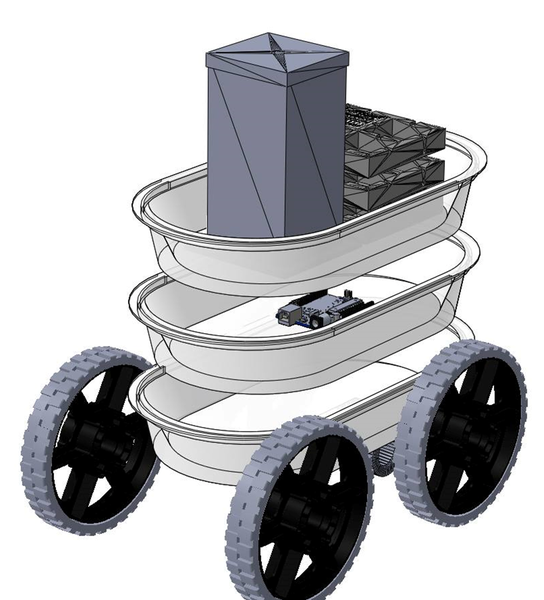 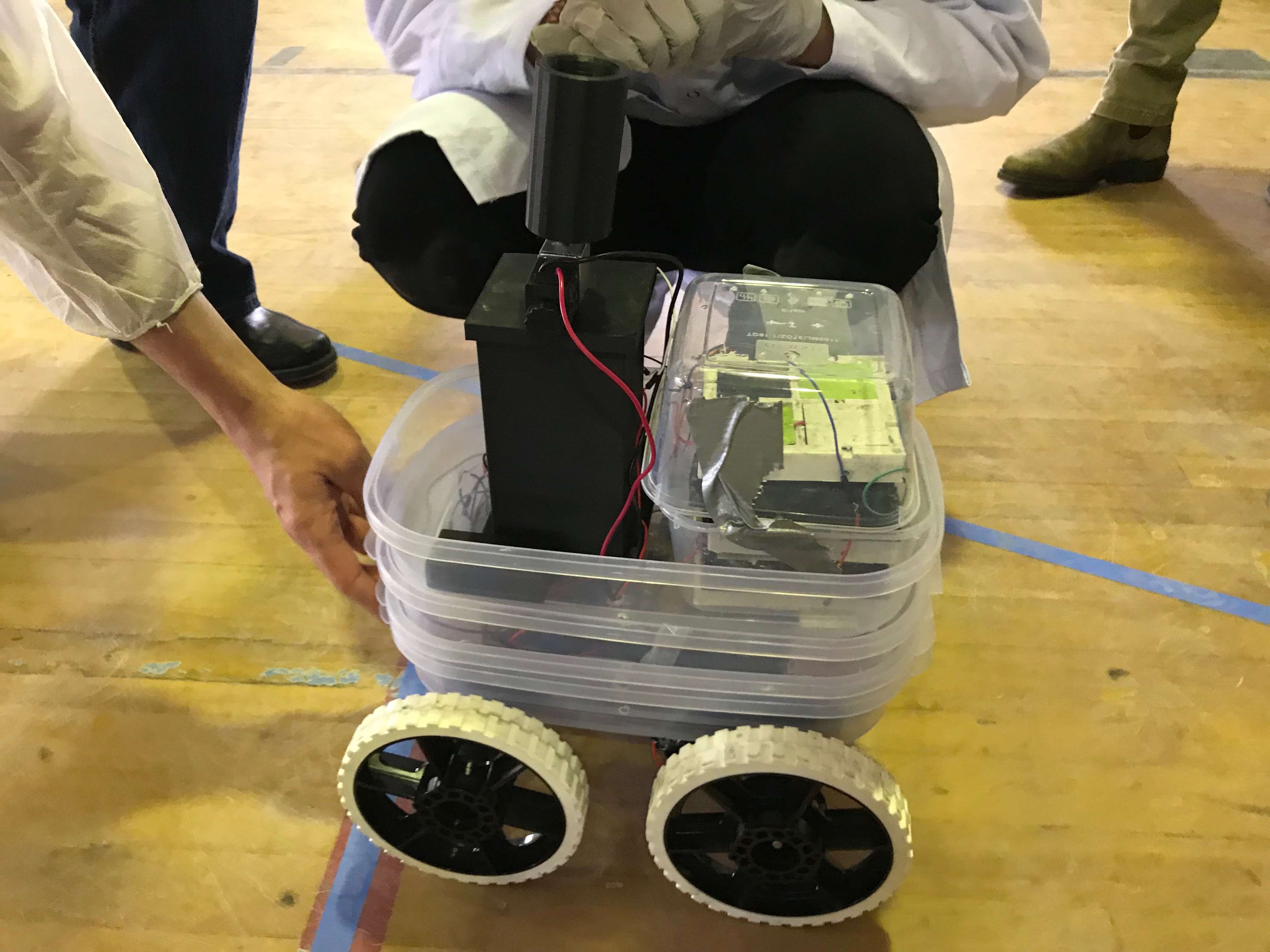 For more information about Chem-E-Car, make sure to check us out at our webpage!